We Need to Talk about the Hyundai Ioniq 5 Headlights

We Need to Talk about the Hyundai Ioniq 5 Headlights

Having just won the World Car Awards categories for the Best Electric Car and Best Design for 2022, the Korean-produced Hyundai Ioniq 5 has surely left a mark on the auto industry. We can go on about its retro-futurist design or its impressive range, but what we want to focus on is the use of LED technology on the Ioniq 5. 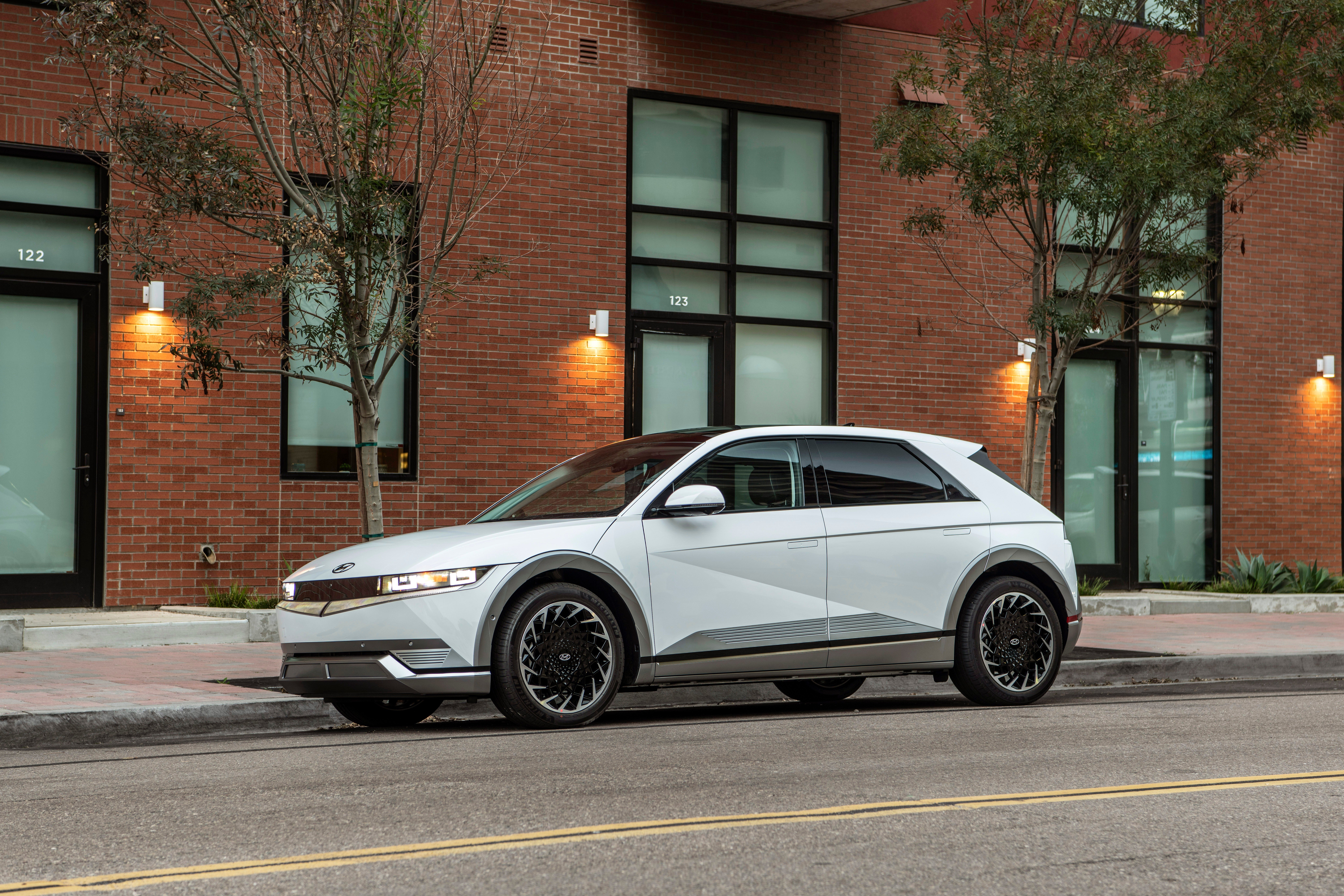 With the diverse capabilities of LED chip technology, it is always nice to see auto manufacturers take advantage of the technology to bring unique and forward-thinking designs to the public. In the past, the whole idea of sleek headlight design seemed to be left up to concept cars and one-off passion projects.

What's Up with the Ioniq 5?

About a week ago I was out enjoying the nice Sunday weather we were having when I spotted an Ioniq 5 in a parking lot. Upon its announcement, I was excited to see a car that embraced a retro design style come to the United States market; especially since we missed the Honda e. Being able to look around the car for the first time, the lighting design on the front and rear of the car blew my mind.

“IONIQ 5’s progressive design represents a departure from past norms, exploring a new design freedom offered by a dedicated BEV platform,” according to Hyundai’s news release. “IONIQ 5’s design language drew inspiration from Hyundai’s ‘45’ EV concept, which debuted at the 2019 International Motor Show Germany. IONIQ 5 captures the character and many details of the concept car.”

This is evident in the design of the headlights and taillights. Hyundai calls it “Cutting-edge Parametic Pixel LED lighting elements,” and the word ‘pixel’ applies to a T. Not only are the actual LED daytime running lights (DRL) made to look like small cubes of light pieced together but so is the texture of the housing. The same can be said for the block-design taillight that runs the width of the car. 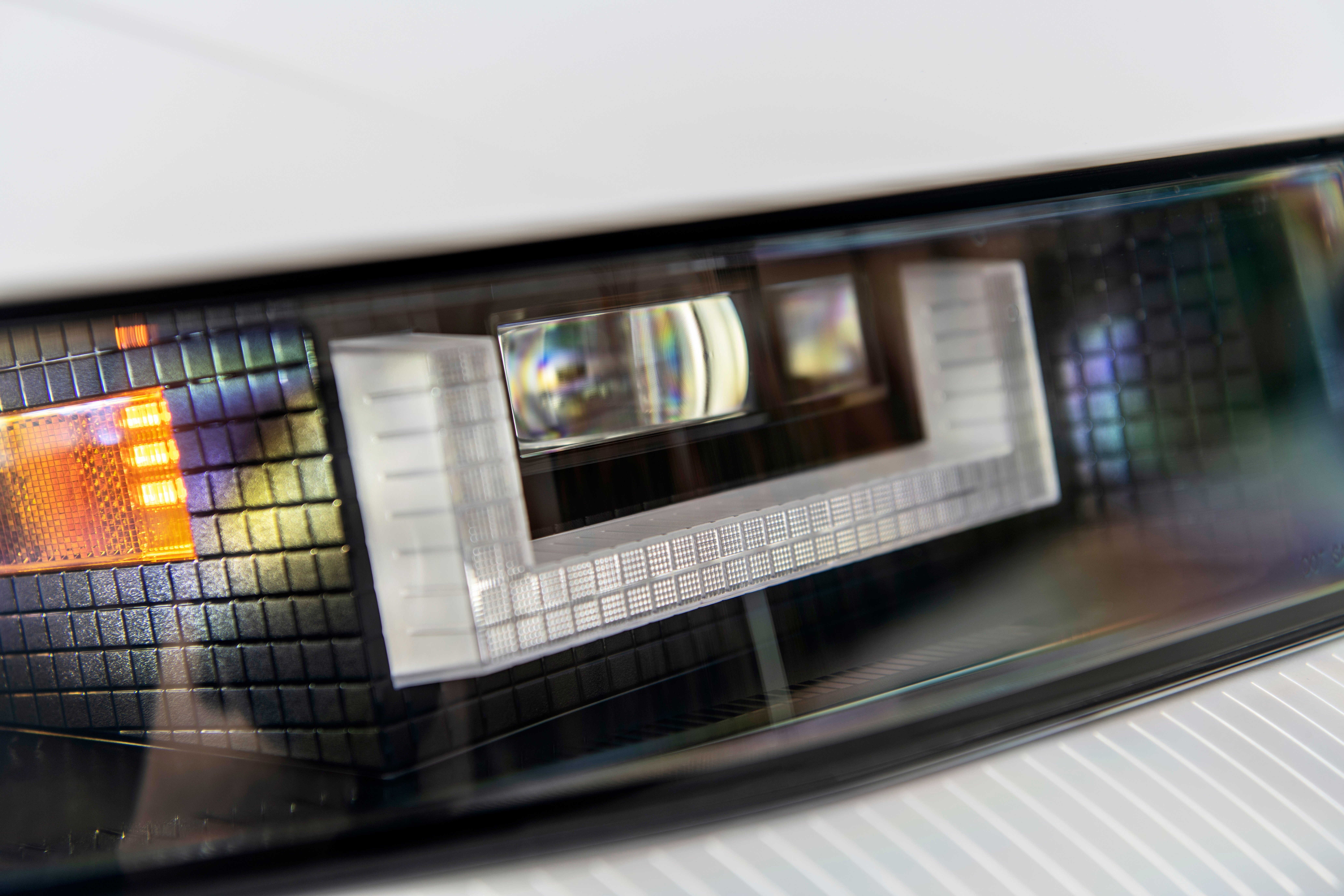 While this may not be the most revolutionary example of headlight and taillight design, the nature of its inclusion on a vehicle that is meant to be enjoyed by the commuter crowd deserves recognition. Hyundai has done a good job of making its vehicle line-up stand out among the other commuter and utility vehicles out there. Their Sonata, for example, has these unique LED DRLs that run from the interior side of the headlights, atop the fenders, and to the peak of the hood.

Hyundai may have ditched the dual-sliding doors of their ‘45’ EV concept from 2019, but the pixel-inspired headlights remained for the production model. We would have liked to have seen the grill design remain, but the simplistic look of the grill with the Parametic Pixel LED lighting brings more attention to the headlights.

Just beneath the headlights is a ‘V’-shaped DRL that extends the front width of the car. It may look a bit like an upside-down mustache, but it certainly makes the car stand out and is unique for its market segment. 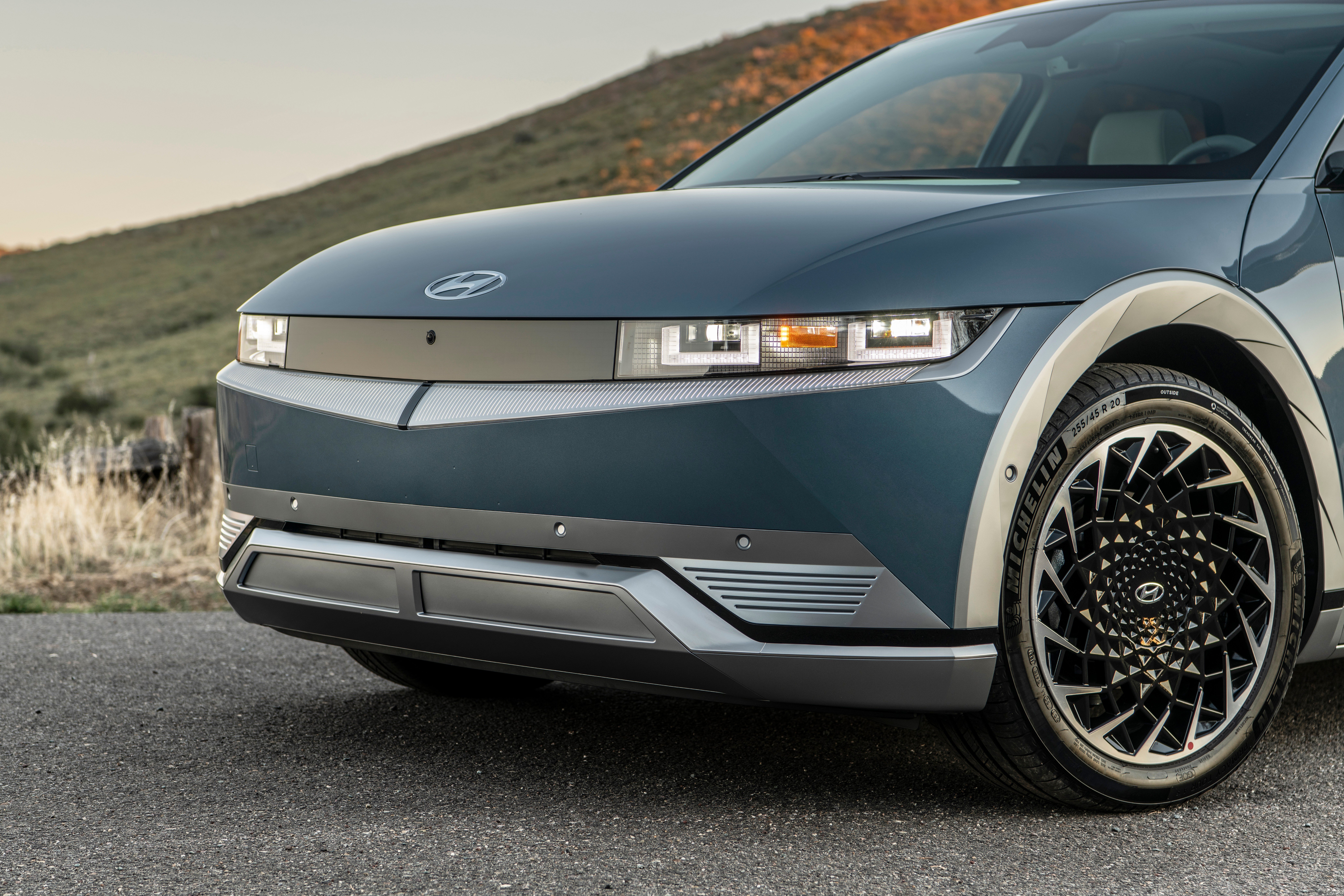 There is nothing out of the ordinary when it comes to the actual components and performance of the headlights. We may not be able to discuss the light output at the moment we can tell a few things based on our information from Hyundai and their press photos.

The LED DRL blocks are utilized as a standard blinker turn signal. When you turn on the turn signal, the DRLs will switch from their white mode to a blinking amber.

Within those DRLs is a rectangularly-shaped projector lens. On the base-model SE Ioniq 5, it comes equipped with MFR-Type lighting. MFR stands for Multifaceted Reflector, which means the Ioniq 5 uses a mixture of LED and reflector technology. The SEL and Limited models use a straight projector-type headlight. 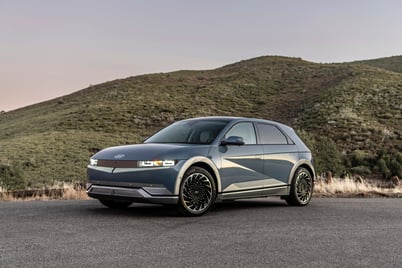 All model trim levels come equipped with an LED Center High-Mount Stop Lamp (CHMSL) as well as automatic headlights and high beam assist. There is also a wide ‘V’-shape that acts as a DRL on all trim levels.

Overall, we are seriously impressed with the direction Hyundai took the Ioniq 5 in. The closeness to the 2019 concept, retro design inspiration, unique use of LED technology, and the overall look of the car is sure to make this a future classic.

If you have any questions, be sure to drop us a comment or you can just say Hi! In the meantime, stay tuned to Better Automotive Lighting for your automotive lighting news and reviews. Check out our recent coverage on the Morimoto sponsorship sweepstakes.

JW Speaker is a company located in Wisconsin…that actually manufactures in Wisconsin! Can you believe it? This company is one of the last big brands that keep their building processes in-house, in the USA.

If that’s not enough of a reason to buy their products, think about the fact that 99% of all cheap Chinese headlights coming out on the market today were inspired by these American designs, or straight-up copied! I mean, if they’re good enough to be copied, why not buy the originals?

The real JW Speaker LED headlights to have a better warranty (5 years), have a better fit and finish, and better light output than any of the copycat headlights you’ll find that look like these, or are “inspired” by this design. 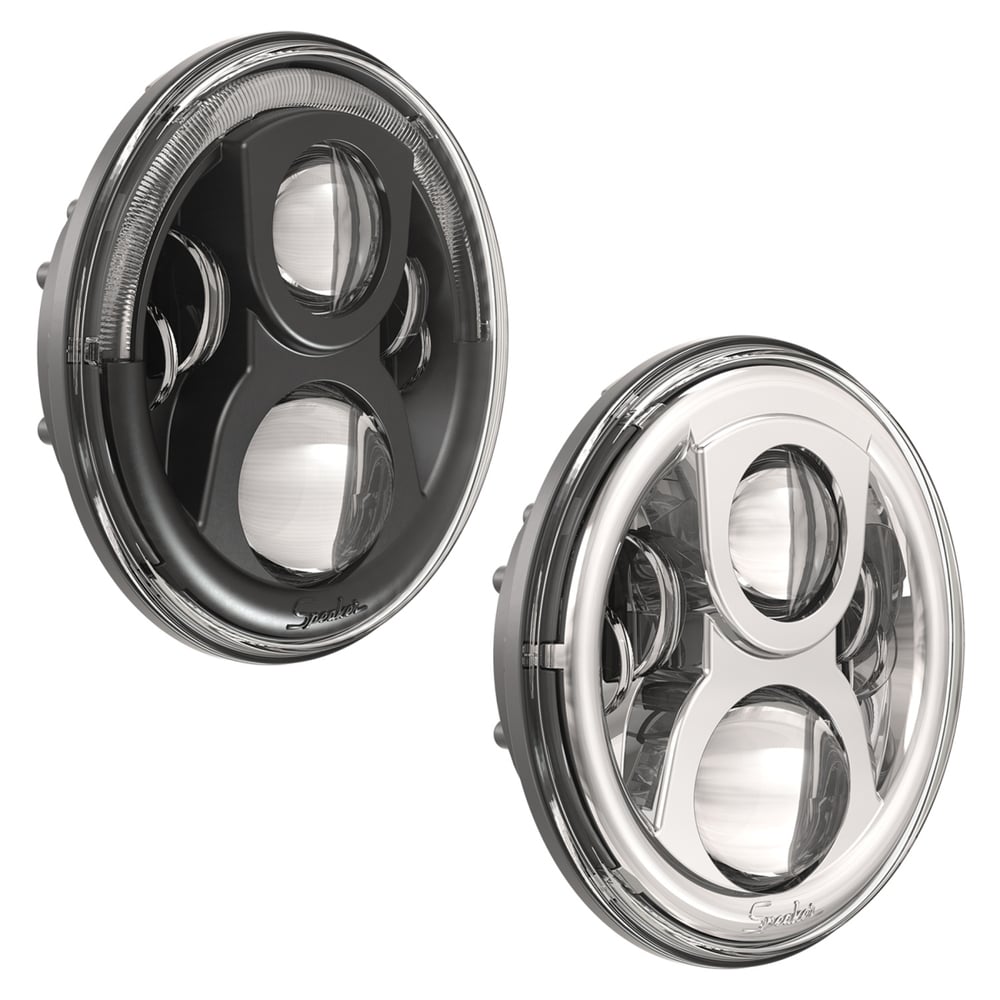 Did you know that the world’s first 7″ round LED headlight was invented by Truck-Lite? Today they still offer one of the best sealed beam replacement products in the world. The Truck-Lite 27270C is a solid, reliable headlight that fits any standard size 7″ round sealed beam headlight application. These are commonly used in Jeep Wrangler, classic cars, semi trucks, and RV applications. 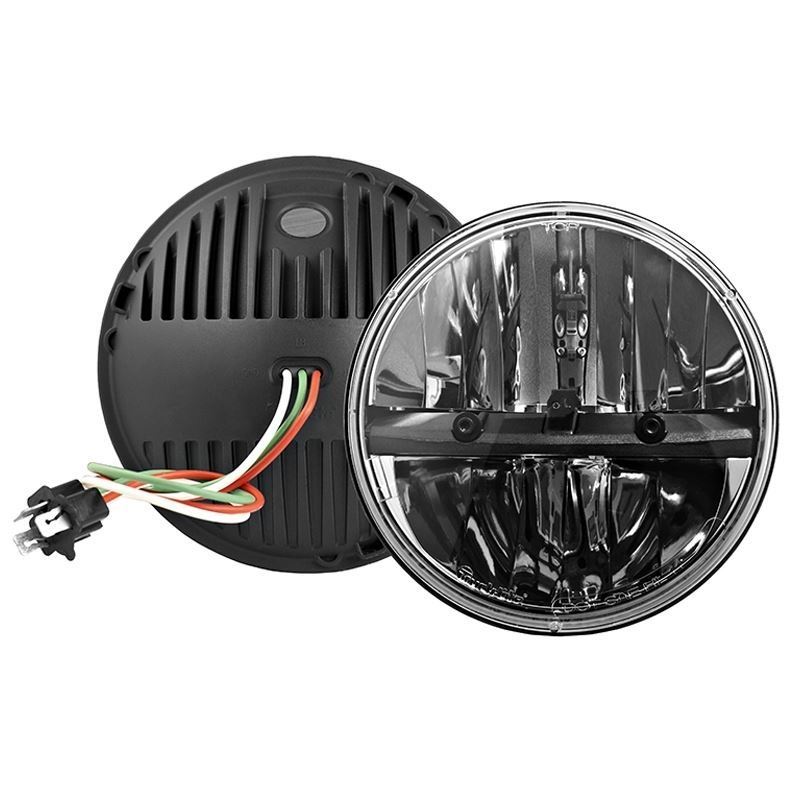 Can't Find the Light You're Looking For? - Better Automotive Lighting
by BETTERAUTOMOTIVELIGHTING posted on April 18, 2012 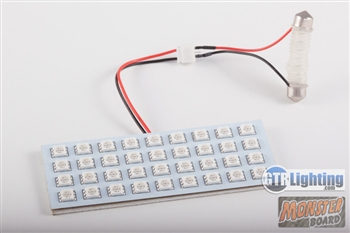 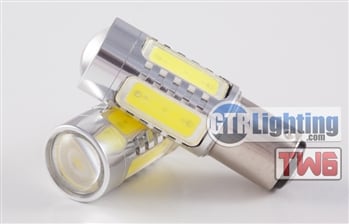