Click here to see all LED options for the Jeep Wrangler! 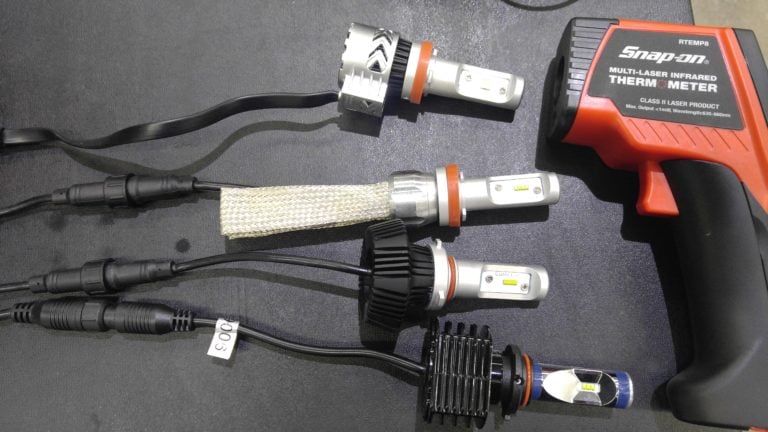 The interesting thing about LED bulbs is until that first one was displayed the LED technology wasn’t bright enough to work in automotive applications. Ever since then, every 6 months or so the next generation of bulbs kept getting better. It was a building game between a better-LED bulb and a better heat sink. First, the LED bulb got brighter and hotter, then the heat sink tech got more efficient, followed by a brighter LED chipset, then a more efficient heat sink. So on and so forth until we reach today where there are many LED bulbs that are successfully brighter than OEM bulbs and have a fairly decent beam pattern! It’s taken a few years and early adopters got to experience the lackluster performance of early bulb models. 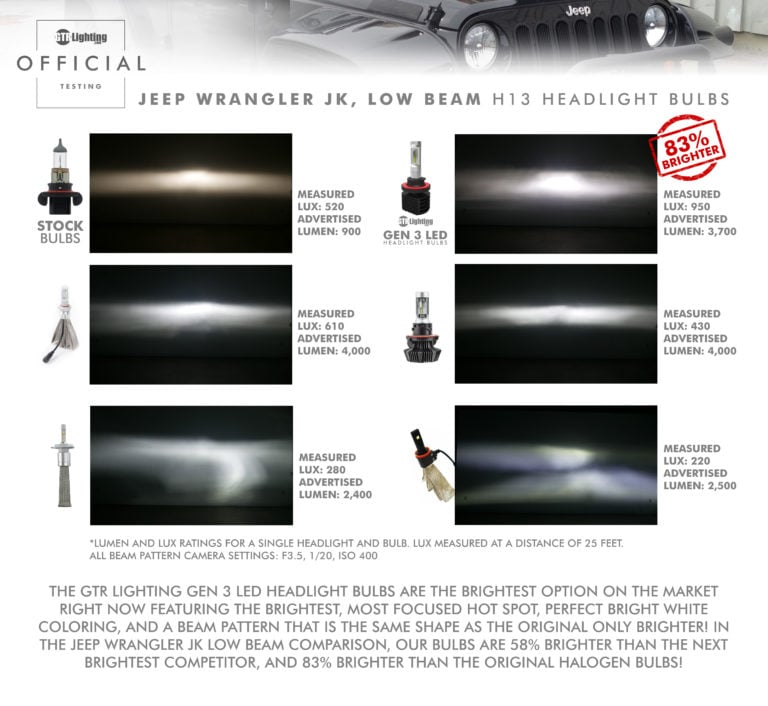 As you can see the GTR Lighting GEN 3 bulb has the best beam pattern of all other LED bulbs, and it’s brighter. More light and a better beam pattern.

In the above diagram you can see from the top left, to bottom right see the stock halogen bulb and 520 lux, then the GTR Lighting GEN 3 Ultra Series bulb at 950 Lux, then the Putco Silver-Lux with a decent beam pattern but less light output than the other one, only 610 Lux. The next one measuring 430 Lux is less light than stock, this is the Oracle “4,000 Lumen” LED bulb. The VLEDs SMZ LED bulb with the long flexible heat sink only measures 280 Lux in this housing (half as bright as the OEM halogen bulb), and lastly, the black Putco Nite-Lux has the worst Lux output and the worst beam pattern of them all in this particular housing.

The reason for measuring Lux instead of just Lumen is because Lumen isn’t a very good measurement of the actual real-world brightness of a lighting fixture. You need to measure Lux at the same point in each bulb to get a good sense of which one is brighter. Then you need to examine the beam pattern to see if the light is actually usable. as you can see the Oracle bulb (#4 in the chart) shows 4,000 Lumen but a lower Lux light output and the GTR Lighting GEN 3 bulb (#2 in the chart) shows a whopping 950 Lux, but only 3,700 Lumen, and an excellent beam pattern. So, Lumen doesn’t tell the whole story.

So, once you pick the correct bulb it’s time to make it work! Unfortunately, the Jeep Wrangler JK isn’t just plug-and-play due to the built-in CANBUS system the vehicle uses to control and monitor the headlights. It’s necessary to use a CANBUS integration module. 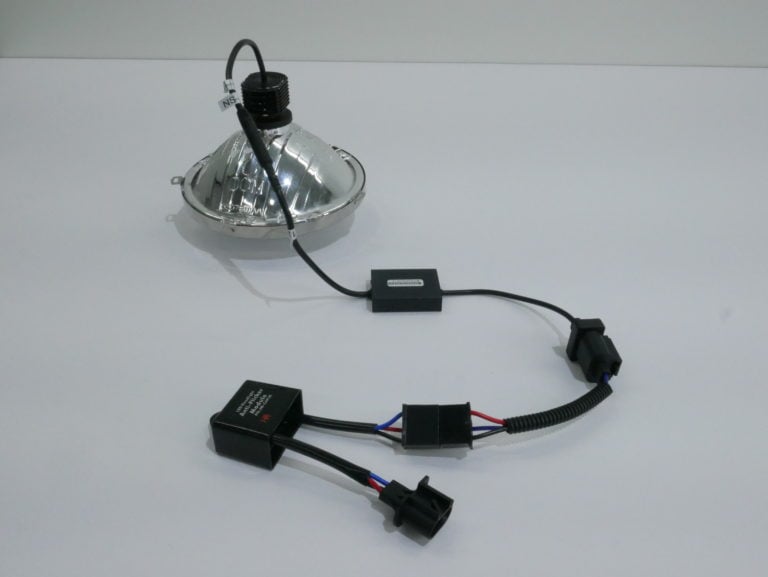 Here is the Jeep Wrangler JK LED Headlight Kit all plugged in so you can see how it works. This assembly makes the kit an easy plug-and-play installation.

This install system is a little large and bulky with the long wiring, but it’s the easiest to use, most effective LED system on the market, and it’s half the price of a full LED headlight housing replacement product! For example, the JW Speaker 8700 J LED headlights go for $500-$6000 for the kit, and this LED bulb system is half the price! 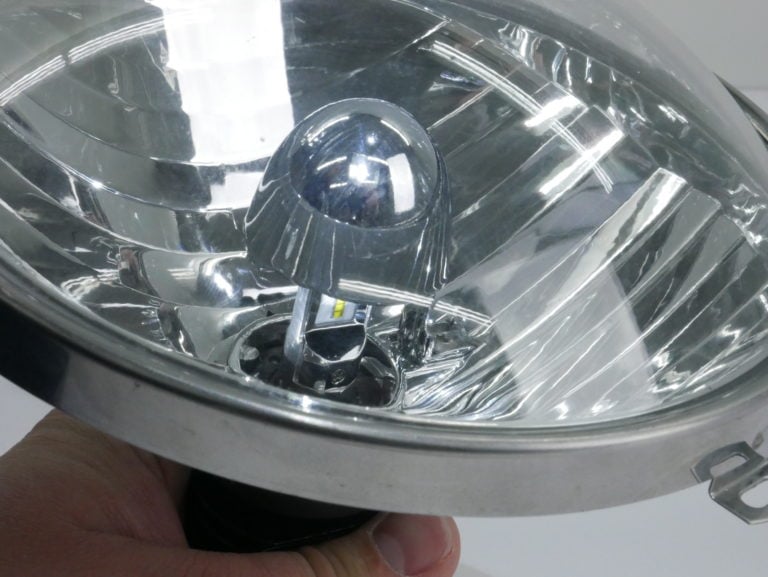 The GTR Lighting GEN 3 LED Bulbs are the best-LED bulb for the Jeep Wrangler JK headlight. Cheaper than a full LED headlight, and better performing than any other LED bulb!

Click here to see all LED for the Jeep Wrangler!

Headlight Revolution tested all the top brands of 7″ Round Headlights to find the very best of the best for the Jeep Wrangler JK. 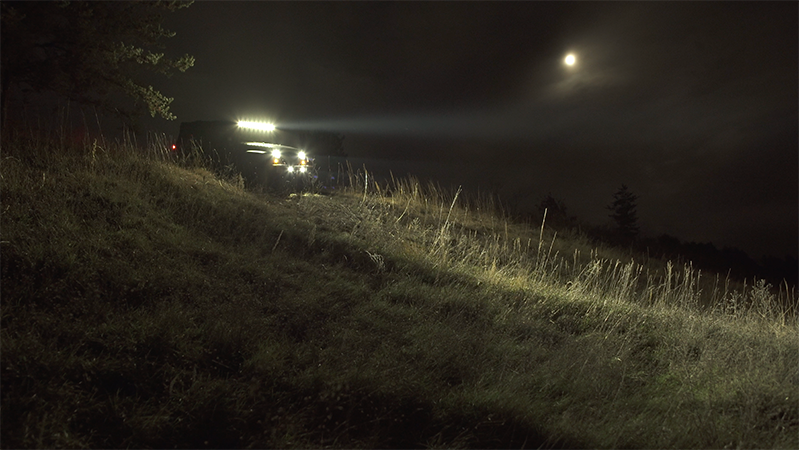 There are many LED options for fog lights on the 2007 to 2017 Jeep Wrangler because it’s such a popular vehicle. Now today there is even an LED option that comes directly from the factory on the 2017+ Wrangler, made by a company called Myotek. Check out our other blog to find out what you need to know about these Myotek Fog Lights here.

But which is the best and the brightest? In this post, we’ll take you through five of the best aftermarket LED fog lights for the Jeep Wrangler and compare them to the stock factory halogen fog and the new from the factory OEM Wrangler fog light.

The Best LED Headlight Housings for the Jeep Wrangler
by Headlight Revolution posted on September 19, 2016

What do you think of LED headlights?

Obviously, they are necessary for driving your Jeep at night. With good headlights, you can easily maneuver your Jeep off-road or on the highway. No doubt, headlights are essential for driving as they are also used to give signals to other road users.

Nowadays, there are many versions of headlights that have been introduced to the market, and one notable one is the LED headlight. What is it, and what do you need to know about it? Let us get some facts: 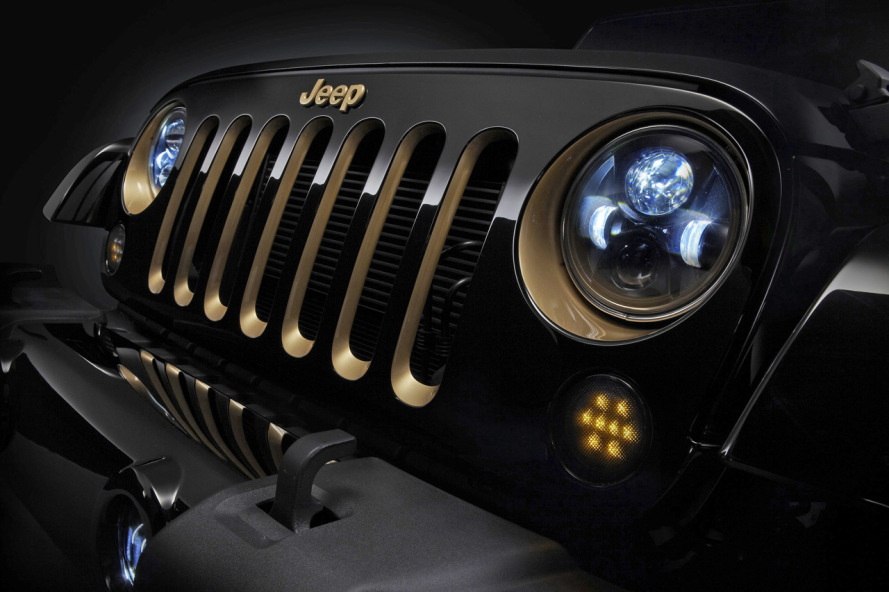