A Front-to-Back Lighting Overhaul for Your F-150

A Front-to-Back Lighting Overhaul for your F-150

The new 2021 Ford F-150 was an exciting addition as the fourteenth generation of F-series trucks. Since its release, there have been a few lighting upgrades that have made their way onto the market. A lot of them are lackluster and don’t add many ooh-s or ahh-s to your new truck. That is, until now. 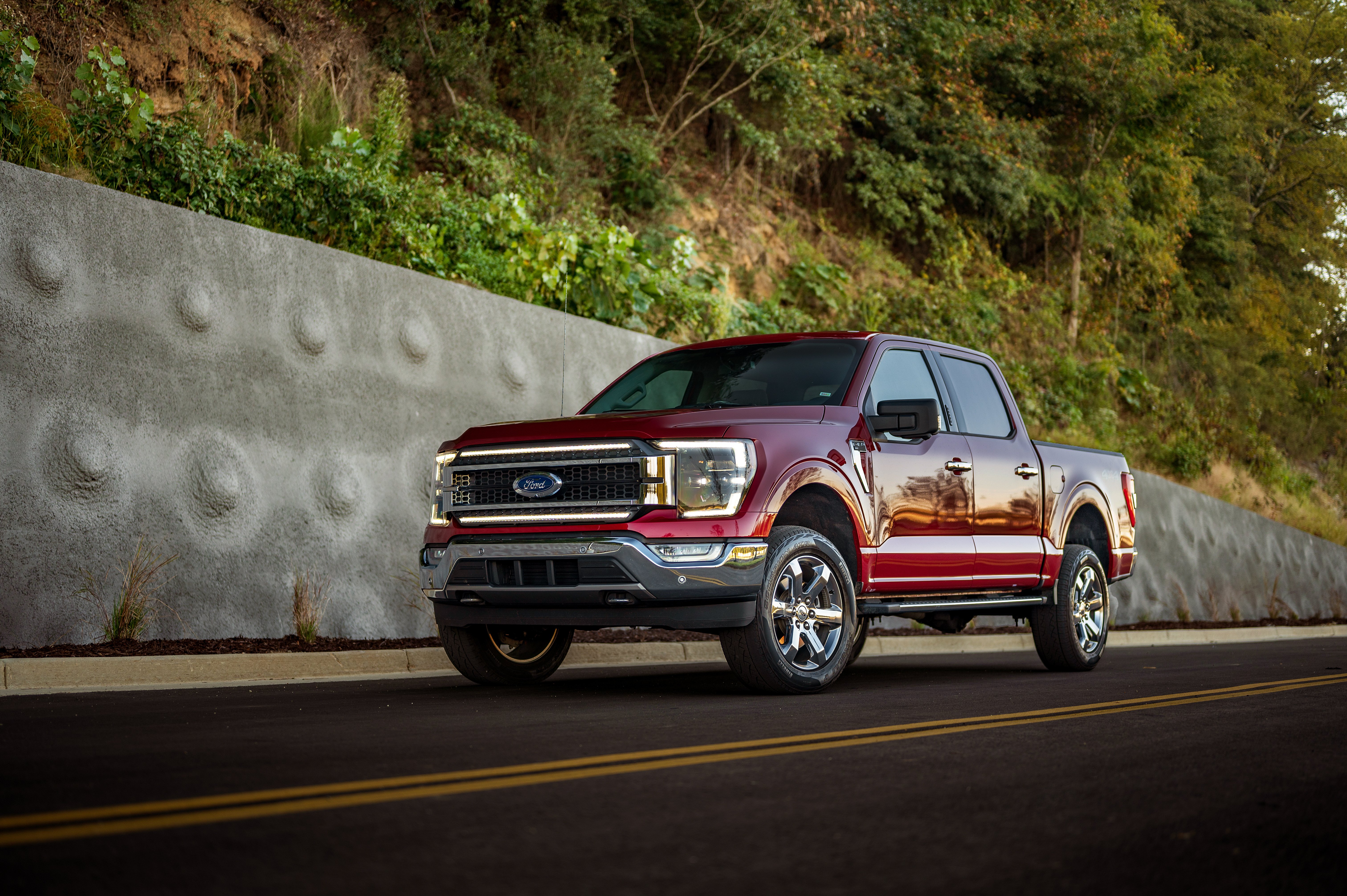 Morimoto is known for paving the way for new automotive lighting upgrades. Usually, F-150 owners are lucky to get a headlight release, then wait a few months for other accessories like taillights, mirror lights, or license plate lights. Luckily for the 2021+ F-150 owners, Morimoto has brought it all to us on a silver platter. Not only did they craft high-quality headlights and taillights, but they’ve also brought new accessories like the XBG Grille and never-before-seen X3B brake lights. Now you won’t have to worry about piecing together upgrades from different companies, Morimoto has brought you a front-to-back upgrade that is good-looking, while still out-performing those OEM options.

If you brought home your new F-150 with the basic halogen headlight package, this is the perfect opportunity for you. Those that have the OEM LED reflector lights will also be able to upgrade to the new Morimoto XB headlights, which have proven to outperform OEM options. The new fully plug-and-play XB LED headlights feature all-new optics within a single, high-powered bi-LED projector. The single projector blends perfectly between the auxiliary low and high beam reflectors, giving your headlights that extra power assists to light up even more of the road. Surrounded on the edges is the fantastically bright-DRL, offered in both white and amber color options. The DRL will also act as the turn signal, and in the usual Morimoto fashion, this turn signal can be operated as sequential or standard. These headlights do a great job of outperforming your stock headlights while still enhancing your truck’s OEM+ look. 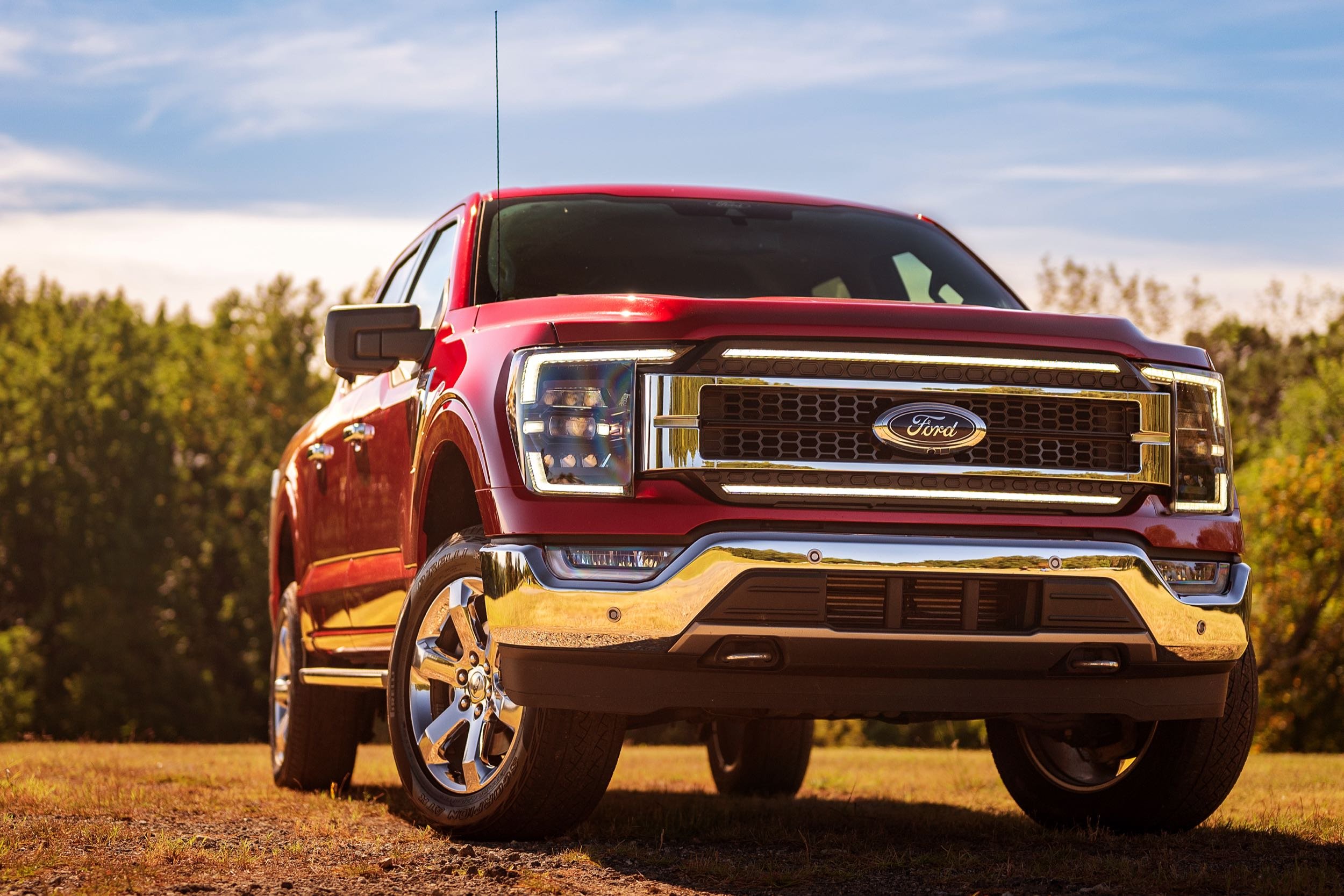 The true testimony of the Morimoto XB headlights is their performance against the OEM headlights. In the Morimoto studio, they use a digital lux meter to compare light in a controlled environment. The testing is done at 25 ft away from the wall so you can easily compare the two. 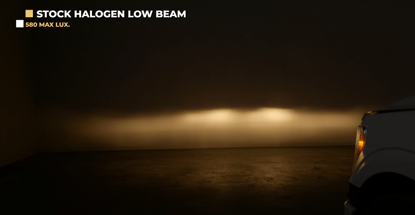 As you can see in the comparison photos, the OEM halogen headlights have two, bright hot spots. However, these hotspots really aren’t wide enough to cover both sides of the road, including ditches. Not to mention, the color temperature of the OEM headlights is an outdated yellow, which seems dim in comparison to the XB LED headlights. The LED headlights are 120% brighter than your stock halogens. They produce a nice clean cut-off with light evenly distributed throughout the beam pattern. 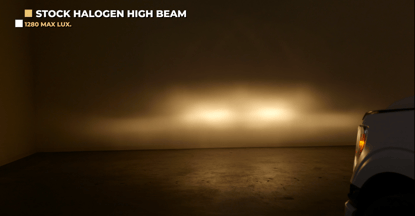 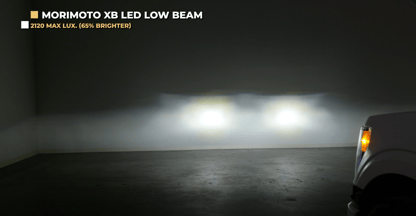 The same trend follows when comparing the high beams of the two headlights. The stock halogen is again dim, yellow, and not as wide as it could be. With the Morimoto XB headlights, you can see a much fuller beam pattern with intense hot spots. These hot spots will allow you to see further down the road, making driving at night a whole lot easier. 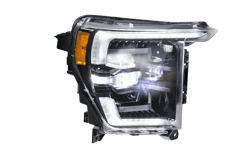 When you own a new truck, it’s usually a high priority to give it the best care for years to come. The same standard should be applied when it comes to lighting on your truck. You already see why the Morimoto XB headlights have so many great benefits, but what about the other lights on your new ride? Now you’ll be able to have aftermarket lights that not only match all around but also really elevate the style and performance of your truck. Paired with the headlights, you’ll find Morimoto’s new XBG grille.

The XBG Grille system is another fully plug-and-play upgrade made to perfectly complement the XB LED headlights. The DRL is offered in the same white or amber colors and will integrate seamlessly when paired with the matching XB headlights. The XBG Grille is a full grille replacement, so why not just upgrade both at the same time? You’ll be able to pick between a chrome or black unfinished trim color. Choosing the unfinished trim allows you to either wrap or paint your new grille to match the rest of the truck perfectly.

The XBG Grilles are one of Morimoto’s newest products introduced to the market only a few months ago. Even more exciting now, they have released an all-new product line-up called the X3B 3rd brake lights. This is the first time we’ve seen a 3rd brake light accessory from Morimoto, though a highly anticipated request from customers. The new 3rd brake light matches the rest of the XB products perfectly, making sure you have integrated lighting all around. 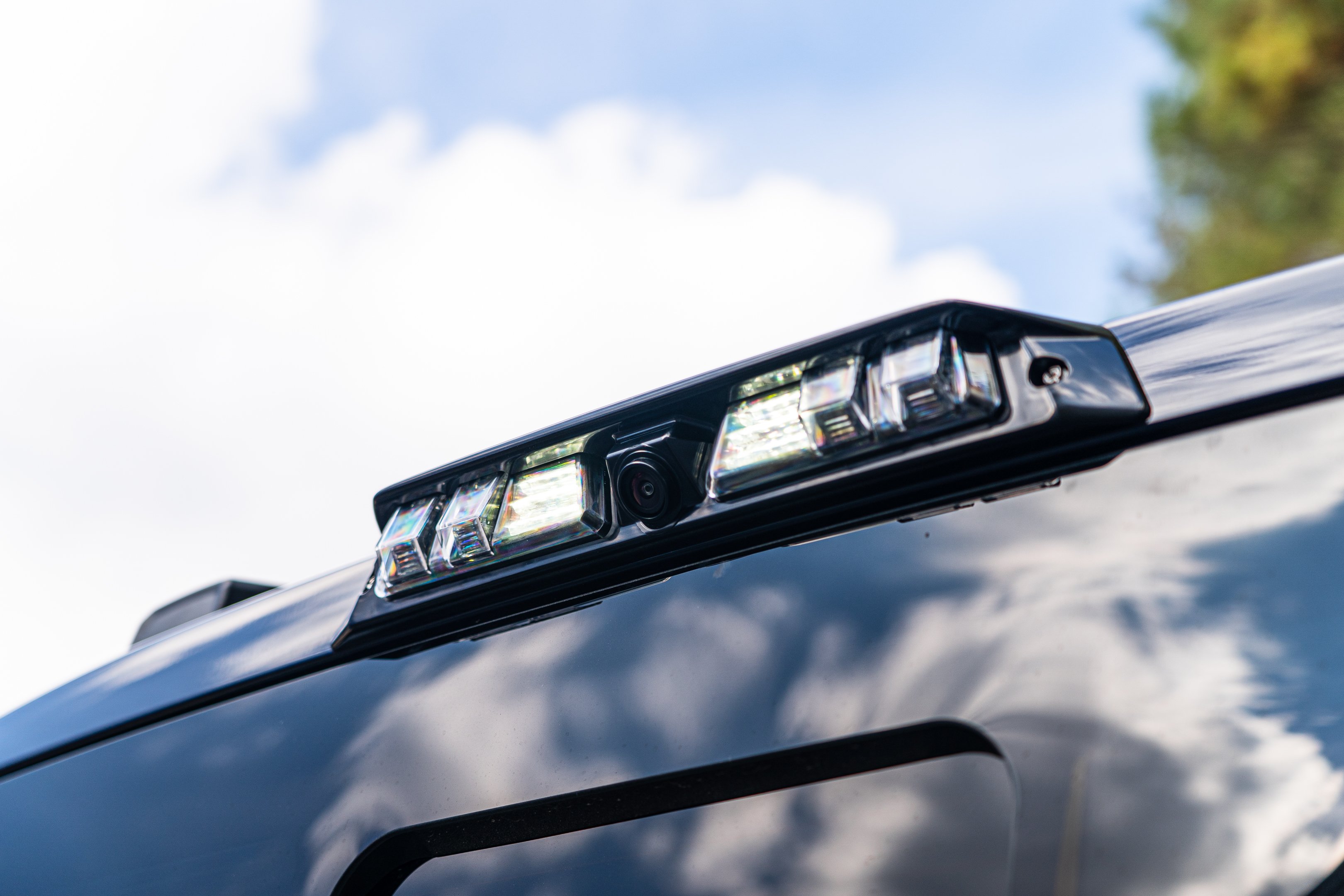 At this point, Morimoto has covered every base except one major aspect. The taillights. Not to worry, because they’ve also released the new XB LED taillights for the 2021+ Ford F-150 with the rest of these great lighting upgrades. Now, you won’t have to comment on their Instagram month after month, asking for a taillight update or if they’re even coming at all! Morimoto really delivered on the product release for the new F-series trucks. 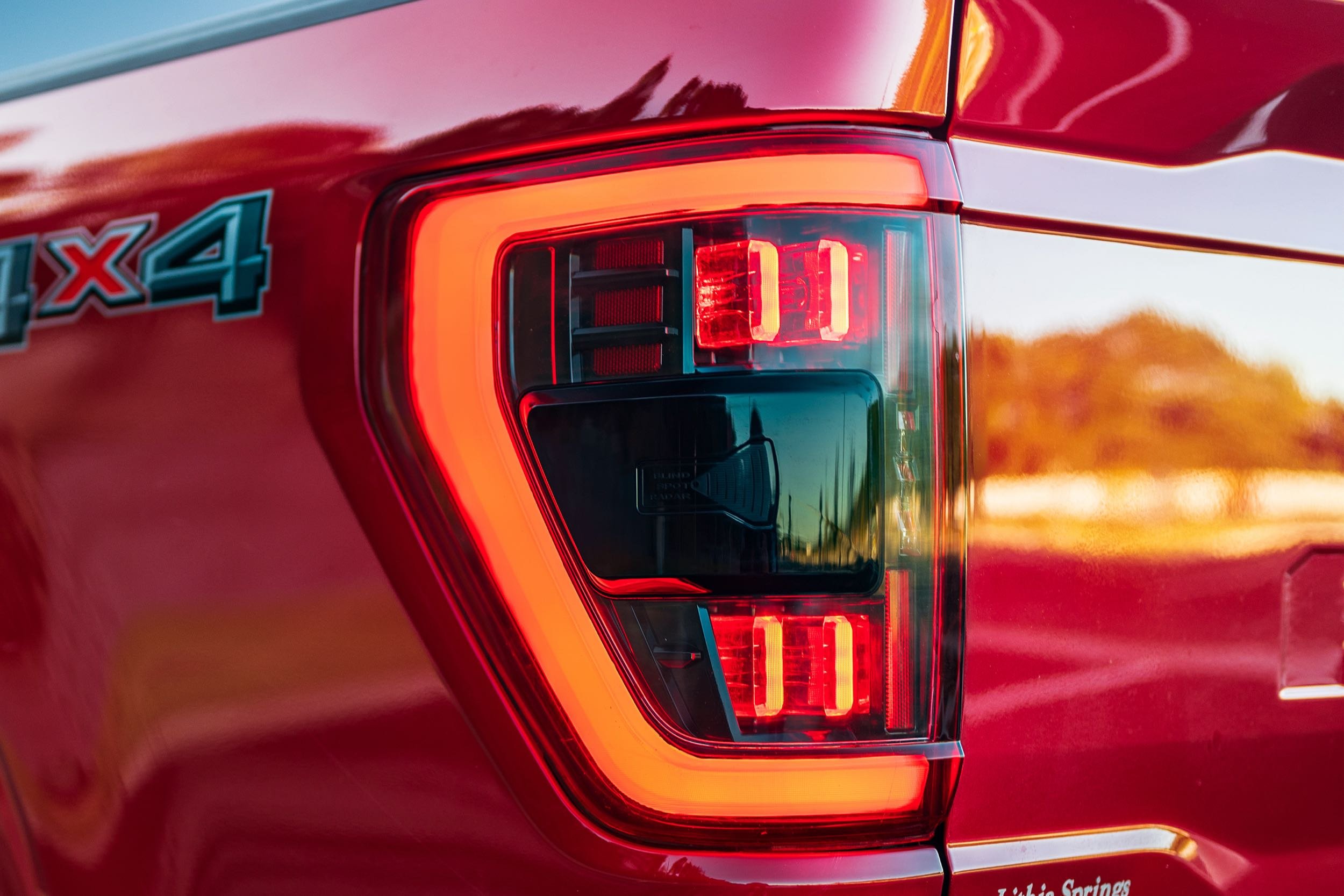 The new taillights offer a modern and sleek upgrade, a much better design and appearance than the OEM units. Not only do they look better, but they are also much brighter. Traffic behind you will easily be able to tell when you indicate your turn signals or engage your brake pedal. Like the other XB lighting upgrades, the taillights are also fully plug-and-play making installation an absolute breeze. Ideally, it should take about 30 minutes in the comfort of your own garage to install the new LED taillights. On top of that, these XB taillights are unique in the fact they are compatible with all models of 2021+ trucks. This means your taillights that contain the BLIS will still be able to upgrade to the new XB taillights.

If having better and brighter taillights isn’t enough for you, there are more Morimoto XB accessories to elevate the rear end of your truck. One thing that most drivers suffer from is reverse lights. While the new XB LED taillights offer a huge upgrade in light output, sometimes it just isn’t enough for weaker eyes. Now, you can easily pair the Morimoto Backup Boost Bar with the XB LED taillights. The XB Backup Boost Bar mounts perfectly above your license light plate and will illuminate anytime you put the truck in reverse. It will nearly triple the light output, making reversing in the dark an easier task. The Backup Boost Bar can easily be installed using plug-and-play connectors on the XB LED taillights, meaning you don’t have to do any custom wiring. Morimoto really puts quality and innovation first when it comes to its products. Instead of being left in the dark, upgrade to lights that can keep up and enhance the look of your new F-150. 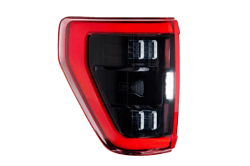 Morimoto always knows how to create the best products in the lighting industry. Their XB line of fully-LED headlights are the highest-performing headlights thanks to the build quality, insane light output, and plug-and-play compatibility. Not to mention, you’re backed by Morimoto’s 5-year warranty because they know their product and stand by the quality. The XB LED headlights complement the new XBG grille perfectly to create a unique front end that ensures you stand out from the crowd. If you want your rear end to look just as bright as the front, make sure to check out Morimoto’s new XB LED taillights and X3B 3rd brake light.

Want your own set of XBs but do not have a Ford truck? Head over to their website, put in your vehicle Year/Make/Model, and see what Morimoto has to offer for your ride.

Have any questions about the products mentioned? Looking for something Morimoto does not offer? Just want to say ‘Hi’? Drop us a comment! We would love to hear from you. In the meantime, stick around the Better Automotive Lighting Blog for all the latest on the automotive lighting world. Also, check out our Facebook page we just started. Be sure to drop us a comment and leave a ‘Like’ to let us know how we are doing.

You need to get the proof!

You should be concerned whether or not your LED headlights are DOT approved: According to the FMVSS108 legal document that regulates automotive lighting – what the manufacturers can and cannot offer to customers – there are a lot of rules and regulations that need to be adhered to in order for a new headlight product to be considered “DOT Approved” or “DOT Compliant” or “Street Legal“.
Therefore a lot of headlight products on the market today are not DOT compliant. In fact, a bunch of headlight upgrade products are stamping their packaging or products with the infamous DOT logo in hopes that nobody questions them… 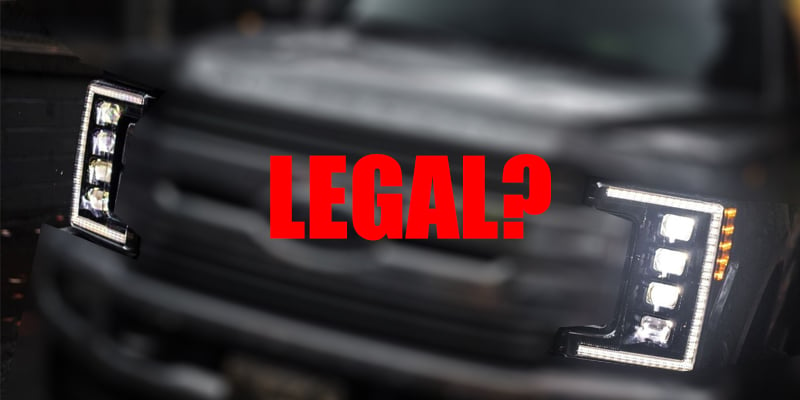 We're making it easy to know what's fresh and new for your truck in 2021. Click here to learn all about the most popular, powerful, and up-to-date behind-the-scenes info on the headlight, fog light, and taillight upgrades for your truck! 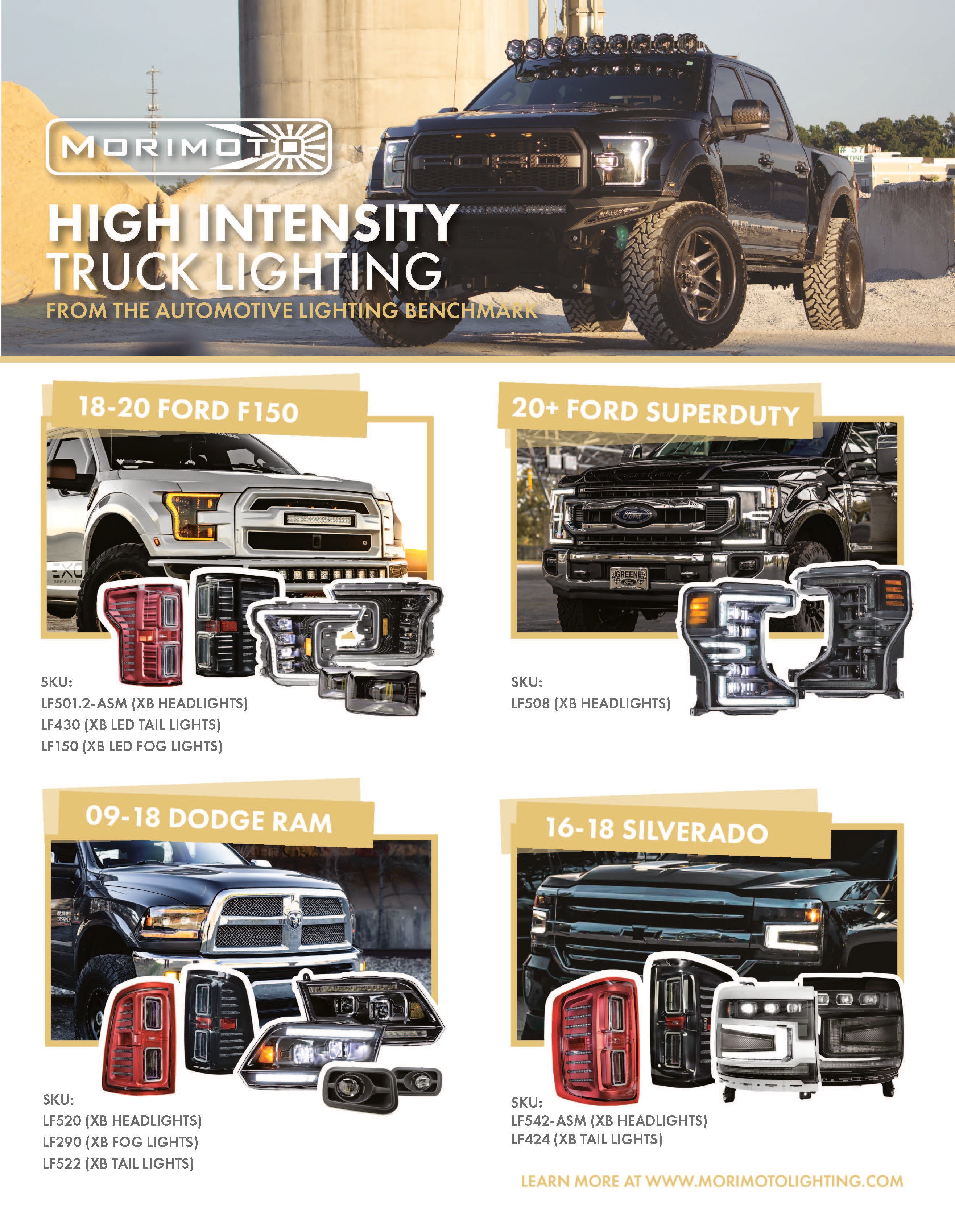 All New RGB Headlights for the Ford Bronco
by BETTERAUTOMOTIVELIGHTING posted on November 21, 2022

All New RGB Headlights for the Ford Bronco

The new re-design of the Ford Bronco took the world by storm with its first debut in 2020. When the 2021 model was finally available, enthusiasts plagued their local dealerships to get their orders in. These orders took months, or for some even years to be fulfilled. But as most owners have stated, there’s nothing more rewarding than seeing it in your own driveway. Many Bronco owners have already dug in deep modifying their new rides with top-of-the-line gear. Until now, there hasn’t been an aftermarket headlight unit worthy of your new Bronco. Morimoto changes that with the introduction of their new XRGB headlights. The XRGB is a never-before-seen headlight from Morimoto, with all exciting new features exclusively for the Bronco. 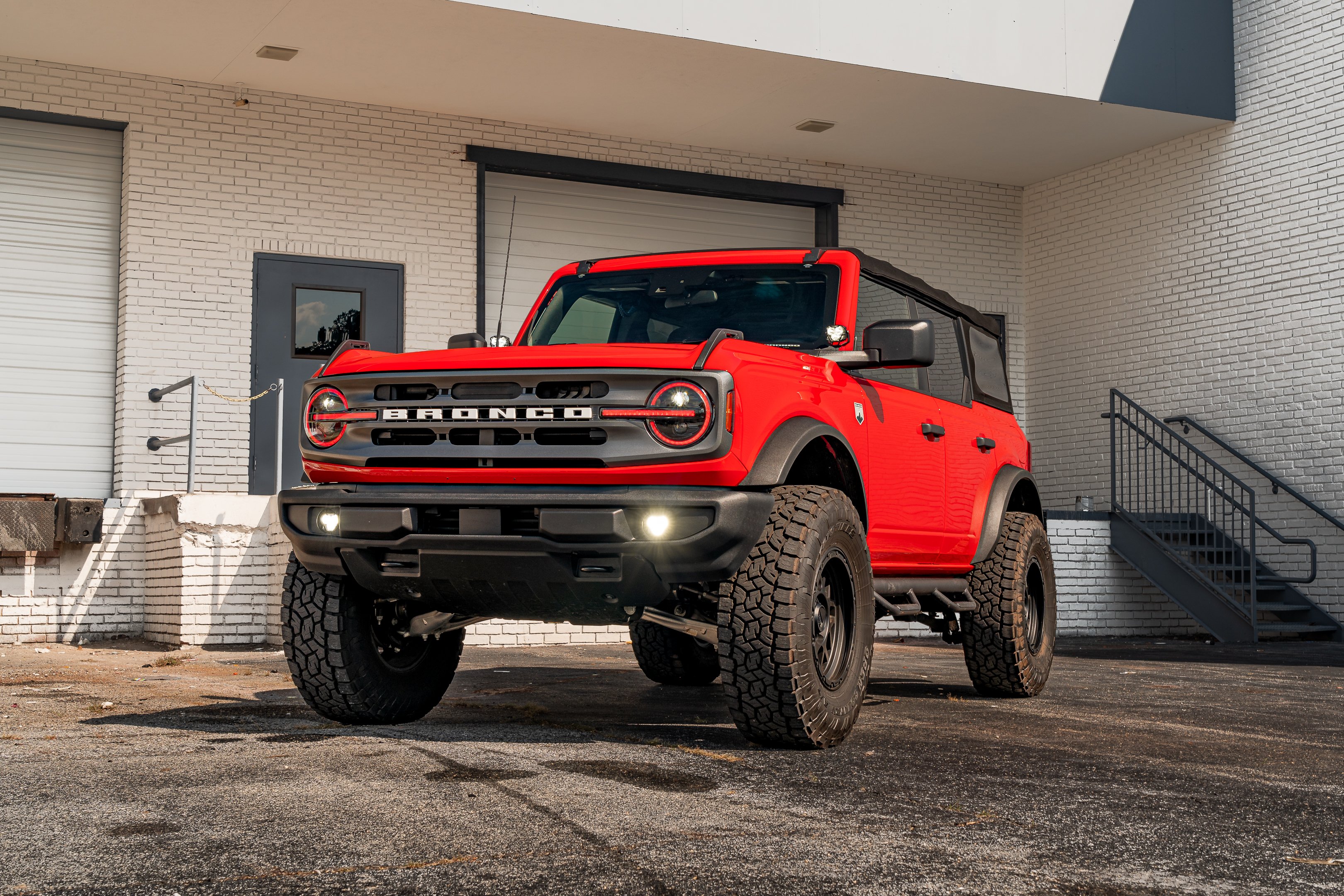