GTR Lighting LED Bulbs - How Do They Stack Up? 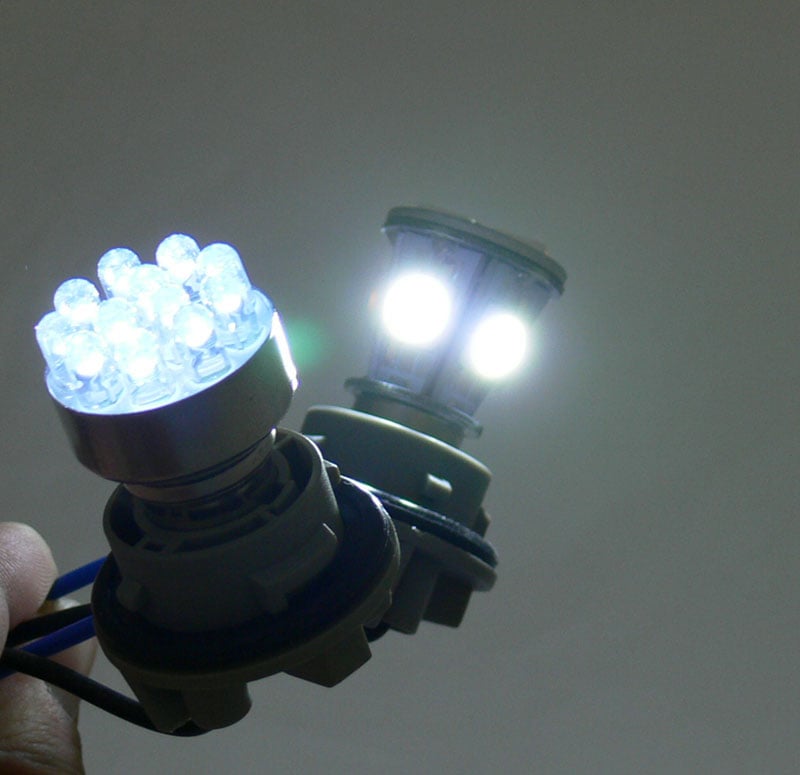 The big thing that is worth talking about is the sheer power the GTR LED lights put out. Nothing that we’ve tested comes close and in fact, next to the GTR LED products, some of the competitors are laughable! I will show you a comparison of different pricing and light outputs to give you a better idea of how these bulbs rate. 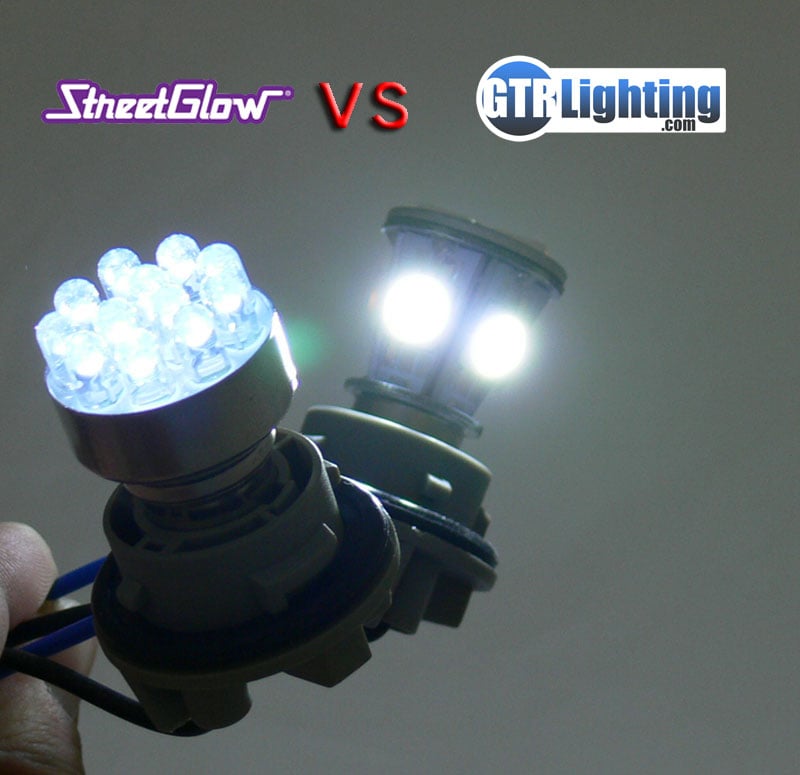 When comparing the StreetGlow 1156 LED compared to the GTR Lighting 1156 LED it is easy to see how they differ. First, the SG bulb has 12 3mm dome LED chips, which seems like an odd choice seeing as they are primarily used for indicator lights on dash boards or switches. They face only in one direction and altogether disappear when installed behind a red lens in a tail light housing. It has a heavy-duty metal base that is shaped like a mushroom and may have trouble fitting into many different styles of 1156/1157 style sockets.

The GTR Lighting 1156 LED bulb pictured above, however, utilizes 7 high power 5050 SMD LED chips, each containing 3 separate diodes. The GTR bulb is massively brighter and offers light output on all sides as well as forward-facing. This is important because the vast majority of automobile light bulb housings use reflectors to create the light output, not just the sheer power of the bulb. Without this side-emitting light the output of the light housing would be nearly useless and appear to be just a single spot. Furthermore, the construction of the GTR 1156 LED bulb is tapered and should easily fit inside even the strictest shaped light bulb socket. 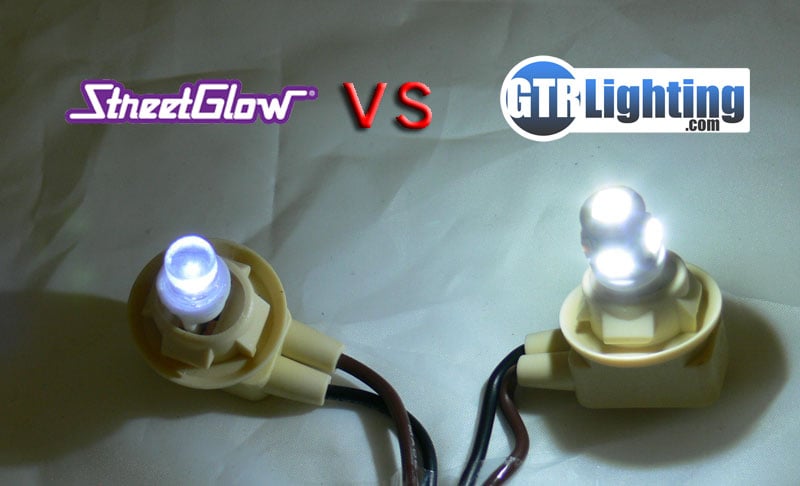 The Street Glow 194 LED is dim compared to the GTR Lighting bulb. 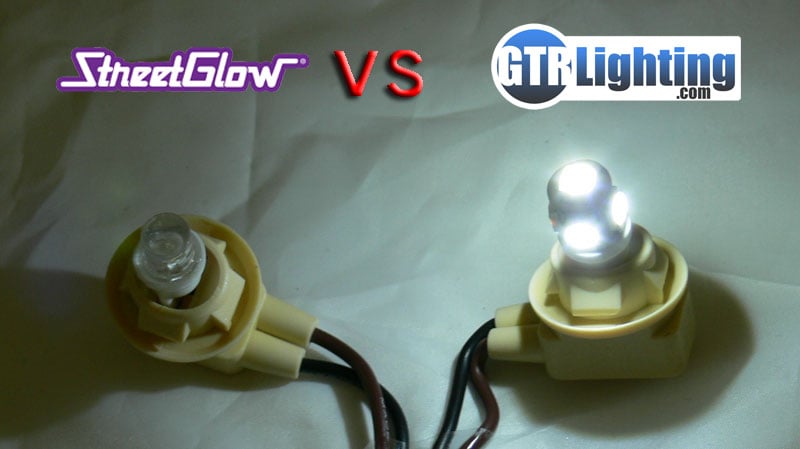 When comparing the StreetGlow 194/168 LED compared to the GTR Lighting LED it is easy to see how they differ again, SG is using inferior technology in a vain attempt to simply offer an LED for the sake of having an LED line without actually offering something worthwhile. The StreetGlow website states that “StreetGlow Mini-Bulbs offer greater illumination and faster response than standard bulbs.” and this is a flat-out lie. The Street Glow T10 style bulbs are so dim that they hardly output any light at all.
First, the SG bulb has a single inverted 5mm LED chip, which does a good job of directing the light, but there’s just not enough of it – the light that is. Again, it is a uni-directional output with a narrow output pattern. The base is a standard plastic T10 housing that is very common.

The GTR Lighting 194/168 LED bulb pictured above again provides more light output and in more directions than it’s StreetGlow counterpart. It features 5 high-power 5050 LED chips, with 1 facing in each direction, including forward-facing. This is a great light if you need it to penetrate a colored lens found in parking lights and brake housings. It is easily 10 times brighter than the SG version and still creates very little heat.

The Plasmaglow LED bulb is dwarfed by the GTR Lighting counterpart!

The Plasmaglow line of LED bulbs is very similar to the StreetGlow lineup, in fact they may even use the same manufacturer. Either way, they are equally inferior, these bulbs amount to nothing more than a pretty plastic light fixture, but pretty useless in the automotive world. First, the Plasmaglow bulb uses nine faint 3mm dome top LED chips, all forward facing, and a clear plastic housing. It does a good job of directing the light, but there’s just not enough to be used safely or effectively to replace an OEM light bulb. The Plasmaglow LED 7440 bulb is uni-directional and of relatively poor quality. This is surprising because Plasmaglow has been affiliated with prestigious organizations like SEMA and the Fast and Furious franchise.

If you look at the GTR Lighting version of a 7440/7443 LED bulb you will see that it is innovative, super-bright and downright impressive. It features 4 high power 1.5w flat LED panels, featuring 3 chips a piece. This is a total of 6w power from 12 surface mount LEDs. The base is a heavy duty plastic and the top is constructed from beautifully designed aluminum. Again, the GTR Lighting bulbs soar where others fail, by producing full 360 degree light output, great style, and high quality.

Conclusion: You get what you pay for!

Some people are interested in the least expensive option, but I’m afraid in this scenario all that will happen is you will end up spending ~$20 and getting nothing in return! Both the StreetGlow LED bulbs and the Plasmaglow LED bulbs are a waste of money, even coming in at half the price of GTR Lighting bulbs. Even if you saved a little money here you still wouldn’t have anything nice in the end. And after all, isn’t that what it’s all about? You “invest” money in the vehicle you love and hope to make it better than it was. My vote is to let GTR Lighting help you make your favorite ride better than before.

The Difference Between H16 and 5202 Bulbs
by BETTERAUTOMOTIVELIGHTING posted on May 9, 2014 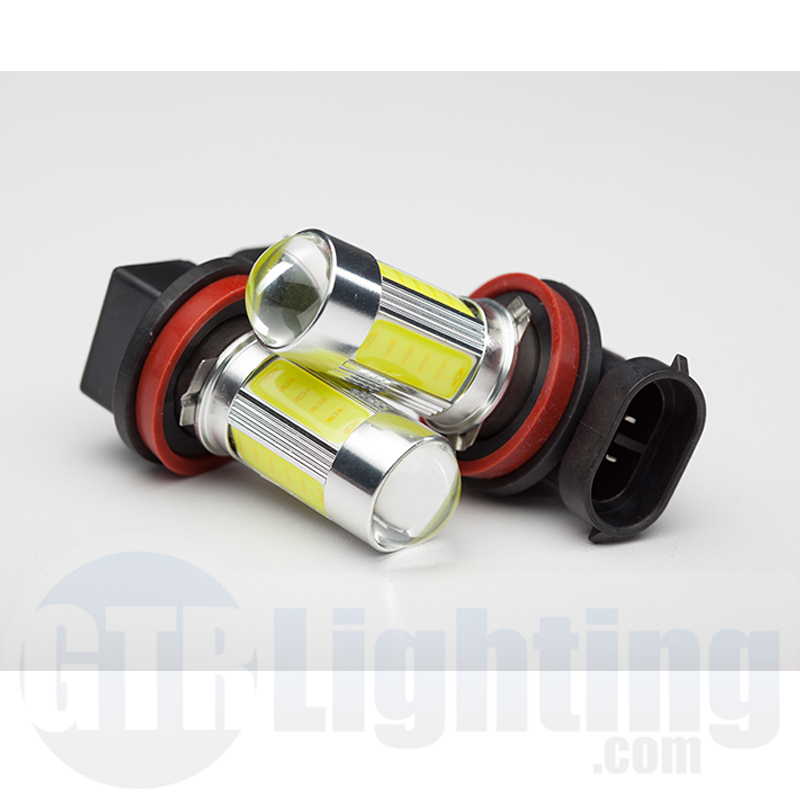 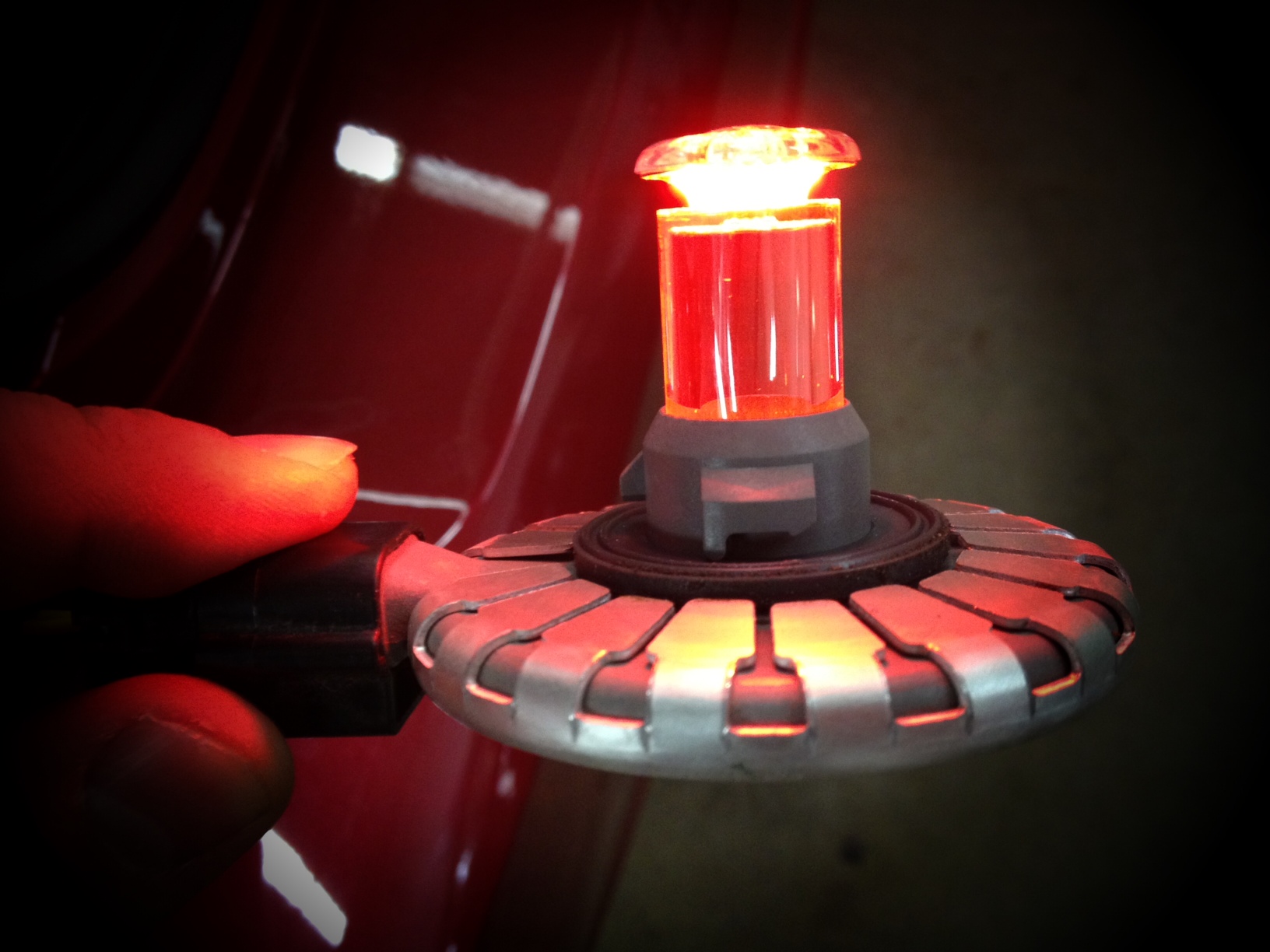